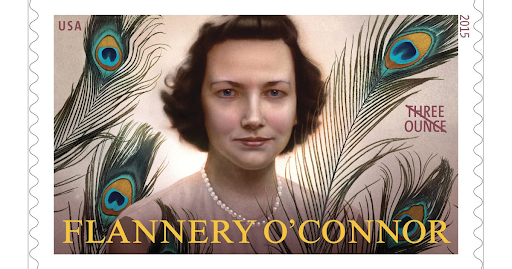 “The serious writer has always taken the flaw in human nature for his starting point, usually the flaw in an otherwise admirable character. Drama usually bases itself on the bedrock of original sin, whether the writer thinks in theological terms or not. Then, too, any character in a serious novel is supposed to carry a burden of meaning larger than himself. The novelist doesn’t write about people in a vacuum; he writes about people in a world where something is obviously lacking, where there is the general mystery of incompleteness and the particular tragedy of our own times to be demonstrated, and the novelist tries to give you, within the form of the book, the total experience of human nature at any time. For this reason, the greatest dramas naturally involve the salvation or loss of the soul. Where there is no belief in the soul, there is very little drama.”
Posted by David Angsten at 8:53 AM No comments:

"Don't part with your illusions. When they are gone, you may still exist, but you have ceased to live."    ~Mark Twain

Posted by David Angsten at 2:49 PM No comments: 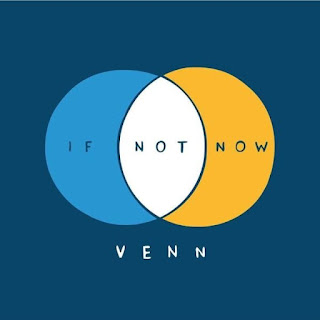 Posted by David Angsten at 8:16 PM No comments: 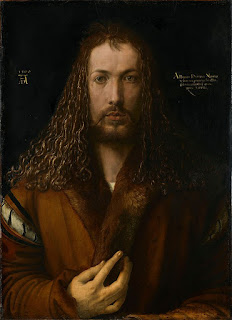 Self-portrait, age 28, painted in 1500
Take a tour of this ground-breaking painting here:
https://www.nytimes.com/interactive/2020/09/25/arts/durer-self-portrait.html
Posted by David Angsten at 3:03 PM No comments: 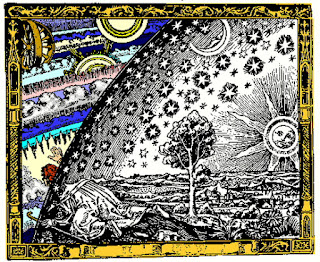 “Mysticism keeps men sane. As long as you have mystery you have health; when you destroy mystery you create morbidity. The ordinary man has always been sane because the ordinary man has always been a mystic. He has permitted the twilight. He has always had one foot in earth and the other in fairyland. He has always left himself free to doubt his gods; but (unlike the agnostic of to-day) free also to believe in them. He has always cared more for truth than for consistency. If he saw two truths that seemed to contradict each other, he would take the two truths and contradiction along with them. His spiritual sight is stereoscopic, like his physical sight: he sees two different pictures at once and yet sees all the better for that. Thus, he has always believed that there was such a thing as fate, but such a thing as free will also. Thus, he believes that children were indeed the kingdom of heaven, but nevertheless ought to be obedient to the kingdom of earth. He admired youth because it was young and age because it was not. It is exactly this balance of apparent contradictions that has been the whole buoyancy of the healthy man. The whole secret of mysticism is this: that man can understand everything by the help of what he does not understand. The morbid logician seeks to make everything lucid, and succeeds in making everything mysterious. The mystic allows one thing to be mysterious, and everything else becomes lucid.”
― G.K. Chesterton, Orthodoxy (1908)
Posted by David Angsten at 2:44 PM No comments: 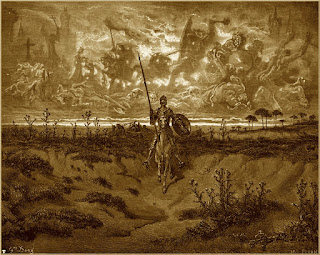 “When life itself seems lunatic, who knows where madness lies? Perhaps to be too practical is madness. To surrender dreams — this may be madness. Too much sanity may be madness — and maddest of all: to see life as it is, and not as it should be!”

Posted by David Angsten at 12:32 PM No comments: