Just saw a fabulous exhibit at the Getty Museum here in Los Angeles--portraits in marble by the 17th Century Italian sculptor, Gian Lorenzo Bernini. This bust of his lover, Costanza Bonarelli, shows Bernini's phenomenal ability to capture the casual, fleeting, lifelike moment, a kind of miraculous photograph in stone. Take a close look at Constanza's mouth. Bernini said the best moment to capture the mouth was just before or after the person spoke, when the lips were parted.

My favorite Bernini sculpture is the ‘Apollo and Daphne’ at the Villa Borghese in Rome. According to the Getty, when this masterpiece was first put on display, "there arose such a cry that all Rome concurred in seeing it as a miracle." The brilliant British author and historian Paul Johnson wrote: "No man had ever achieved such mastery over marble before, and no one, we can be sure, will ever again approach it." 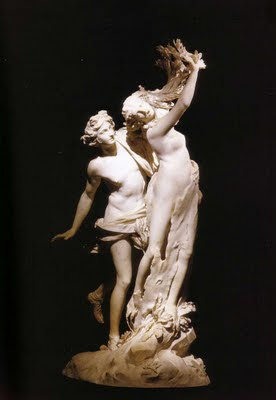 The sculpture captures the climactic moment of the story of Apollo and Daphne, the famous myth of fleeting love I recounted in Night of the Furies:

Apollo was the greatest archer, the god of the silver bow. When he saw Eros struggling to string his little bow, Apollo made fun of him, and Eros took revenge. The cherub pulled out two arrows from his quiver: one that kindles love, and one that dispels it. The one that kindles was sharp and glistening with a gold point; the one that dispels was blunt and heavy with a lead tip. From the top of Mt. Parnassus, Eros shot Apollo through the heart with the gold point. The leaden one he shot at a nymph named Daphne, the beautiful daughter of a river god.Apollo fell immediately in love with Daphne, but Daphne spurned him and fled. He chased her through the woods. She ran like the wind. The further he pursued her, the more he fell in love, but Daphne grew more fearful the closer he came. As Apollo was about to overtake her, she cried out to her father for help, and the river god used his magic. A numbness seized Daphne’s limbs, bark closed over her body, her hair turned into leaves, her arms into branches, her feet into penetrating roots.
She had turned into a laurel tree. Only her beauty remained.

The laurel became the tree of Apollo, from which came the laurel wreath of victory and achievement. A crown well deserved by Bernini.
Posted by David Angsten at 11:20 AM No comments:

WritersBreak.com was named "Best Website for Writers" by Writer's Digest Magazine. The site is bursting with useful information.

Its Editor-in-Chief, the lovely Jennifer Minar, recently did an interview with me discussing the writing of my new thriller, NIGHT OF THE FURIES. I'm honored to join the company of her other interviewees, including Michael Connelly, Peter Abrahams, Janet Fitch, and more. Check out the FURIES interview HERE.
Posted by David Angsten at 4:43 PM No comments:

Phryne before the Areopagus
Jean-Léon Gérôme, 1861, Hamburg Kunsthalle
I've always loved this painting (click to enlarge). It's shocking and beautiful and mysterious all at once. For years a dog-eared postcard of it served as my bookmark. But for some reason, I never sought out the story behind it. I suppose I feared it would somehow diminish the thrill of the picture itself.
It wasn't until I was doing research for Night of the Furies that I discovered what the scene was about. It turns out it's connected with the Eleusinian Mysteries, an ancient Greek religious ceremony (and a key element of my novel). The woman, Phryne, was a famous hetaera, or courtesan, in 4th Century B.C. Greece. She was accused of profaning the Mysteries' seaside purification rites by striding naked into the water for all the world to see.
Her trial took place at the Aereopagus, a rock hill near the Acropolis that served as the setting for the high court of Athens. I took this picture of it from the vantage of the Acropolis. A temple dedicated to the Furies once stood at the foot of the rock.

Here's Wik on Phryne's trial: "...she was defended by the orator Hypereides, one of her lovers. When it seemed as if the verdict would be unfavourable, he tore open her robe and displayed her breasts, which so moved her judges that they acquitted her. ...The judges' change of heart was not simply because they were overcome by the beauty of her nude body, but because physical beauty was often seen as a facet of divinity or a mark of divine favor during those times."

Phryne's divine beauty inspired more than the court of Athens. The scene of her with her hair loose, wading nude through the shimmering sea, inspired the greatest painter of classical Greece, Apelles. His renowned painting Venus Anadyomene ("Aphrodite Rising from the Sea"), though lost to time, launched a recurring, iconic motif into the long history of art.

Here's a version in marble from a 4th century A.D. Roman villa.

The motif was revived in the Renaissance, two thousand years after Apelles. It inspired Botticelli's famous "Birth of Venus."

In the 20th Century, the image found its way into the movies, with Ursula Andress emerging from the sea in the first and greatest Bond picture, Dr. No.

The scene quickly became a cinema classic, and was knocked off again in 2002 with Halle Berry as the Bond girl, Jinx, the latest Aphrodite incarnation.

I'm all for sexy girls with knives in their belts, but my favorite Birth of Venus is by the 19th-Century French artist William-Adolphe Bouguereau.

It's probably this dreamier Aphrodite, tucked in the back of my mind somewhere, that inspired this scene in Night of the Furies:

The girl who held my eyes now was stepping lazily through the surf, gazing down at the frothy water, seemingly lost in herself. She was wearing a bikini with sailor stripes and the emblem of an anchor embroidered on the cups. Her hair was a rich black, cut to her shoulders, and tangled from drying in the wind. Her mouth was slightly open, and her downcast eyes were dark. She looked like a sated panther, moving with a kind of languid grace, dragging her toes through the water. Something about her—maybe the strength of her profile, or the whiteness of her skin, or the way she peered with quiet intentness at the strangers parading around her—told me she was different than the rest, that this was not the sort of place she came to very often. There was an air of youthful innocence about her, but an air intriguingly tinged with darkness, a sort of sensual contentment. I found the very sight of her arousing.

It seems appropriate, as the world descends into economic hysteria, to be launching a book about Dionysian madness. Once again fear is the obvious driver, as it’s so often been in the past.

Famine sparked the “Great Fear” that swept France in the summer of 1789. Peasants went on a mad rampage, burning and ransacking their way through the countryside. Eventually it led to the storming of the Bastille and the start of the French Revolution.

Mass hysteria has many theories: “convergence,” “emotional contagion,” “collective effervescence.” They all involve a mutual reinforcement, an infectious multiplication of feeling, with emotions ranging from paranoia and panic to gleeful, unrestrained enthusiasm.

In the Middle Ages, episodes of what’s called the ‘dancing rage,’ or St. John’s Dance, erupted all over Europe. People would basically go wild in the streets, dancing, screaming, writhing, convulsing, even foaming at the mouth. It was another form of mass hysteria, and it happened in cities all over Europe. Priests thought the people were possessed by the devil. Music was played to help calm them.

It may be more than fear that feeds these collective convulsions. Professor Mary K. Matossian believes that in both these historical cases an initial catalyst was hallucinogenic ergotism. France’s “Great Fear,” like St. John’s Dance, may have been caused by ergot poisoning from the bread people ate. The ergot alkaloid ergotamine is an immediate precursor to LSD. It causes convulsions, hallucinations, mania, and psychosis.

The ergot fungus usually arises when the season is particularly wet and the grain is left damp. In that long-ago summer in France, a drought had been followed by storms and floods that ruined the year’s harvest. Usually farmers threw out ergot-infected yields, but when the harvest was poor, they couldn’t be choosy. They went ahead and ate the bread and chased the nobles all the way to the guillotine.

Forgive the pun, but once again it’s bad bread that’s making us throw the bums out. Only we may have another—even more infectious—catalyst to our hysteria.

The mass media.
Posted by David Angsten at 9:43 AM No comments: