MAN INGESTS DRUG, TURNS INTO RAGING CANNIBAL.  Who could have imagined such a thing? 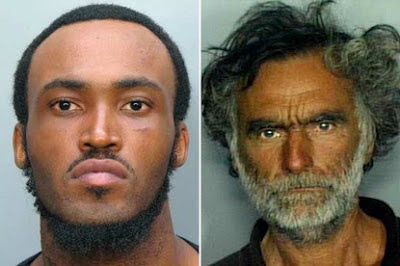 "On Saturday, May 26, Ronald Poppo, a 65-year-old homeless man, was attacked allegedly by 31-year-old Rudy Eugene, also homeless, in Miami, Fla.  The attack has been dubbed the "naked zombie attack" and "zombie apocalypse" because Eugene reportedly pounced on Poppo while naked and began eating his face, to the shock of several passerby and vehicles.
"Eugene reportedly continued to eat Poppo's face until police arrived 18 minutes later. All that was left of Poppo's face was his beard and mustache, reports indicate.  Eugene is suspected to have been taking a new drug called "bath salts," and although it was not immediately clear if the properties of the drug are linked to the household item of the same name, there have been other violent cases involving the drug." (The Christian Post)
Posted by David Angsten at 9:26 PM No comments: 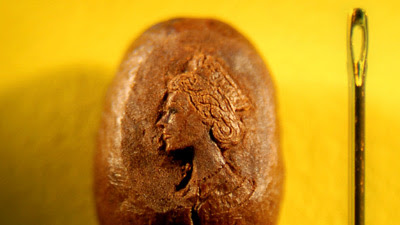 "A sculptor has created what is believed to be the world's smallest portrait of the Queen - on a 2mm coffee bean.  ...British micro-sculptor Willard Wigan created the commemorative tribute by slowing his heartbeat and working between beats to avoid hand tremors.  He used tiny homemade tools and painted with a hair plucked from a housefly's back to carve the microscopic figures."
Posted by David Angsten at 8:07 AM No comments: