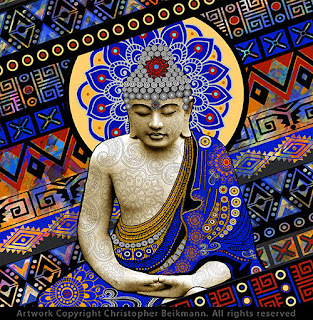 Just received this fabulous Buddha print from digital/mixed media artist Christopher Beikmann of Tijeras, New Mexico. Called "Rhythm of My Mind, it's a metal print image, incredibly luminous and vivid, exuding a peaceful calm amid a cascade of vibrant patterns. 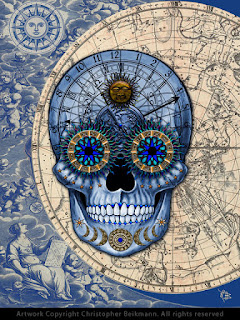 Beikmann's artworks focus on spirituality, mythology, and ancient cultural tradtions. He has an incredible eye and a playful touch, creating striking images simultaneously ancient and modern. 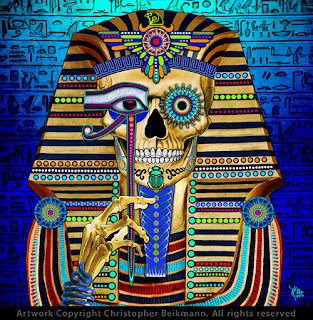 Much of his work can be viewed online at Fusion Idol Studios, and his images can be found on everything from phone cases to throw pillows at Da Vinci Case.com. 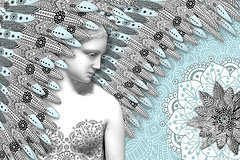 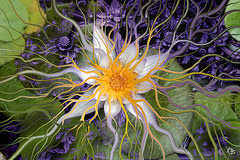 From the "Some Things Never Change" File

In The Assassin Lotus, the Muslim conquest of the Silk Road Buddhist kingdom of Khotan is recounted in a poem by the 11th century Turkish scholar Mahmud al-Kashgari:


"Like river torrents,
We flooded their cities,
We captured their monasteries,
And shat on their statues of the Buddha."

A thousand years later they're at it again, most recently destroying Sufi and Shiite mausoleums in the ancient Silk Road city of Palmyra.

Posted by David Angsten at 2:52 PM No comments: 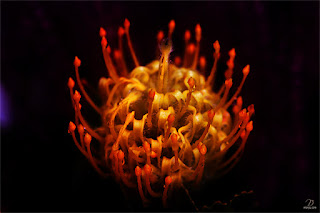 “Soma was conceived to be a divine presence dwelling within a psychoactive substance of the same name, which was consumed by humans and deities before battle and at the end of ritual celebrations. Perhaps it was soma that inspired the early Hindu seers to probe deeper into the nature of reality.”  ~Todd T. Lewis,  Buddhism

Posted by David Angsten at 4:53 PM No comments:

"The true drama, and especially the tragedy, calls for the hero to exercise will, to create, in front of us, on the stage, his or her own character, the strength to continue. It is her striving to understand, to correctly assess, to face her own character (in her choice of battles) that inspires us–and gives the drama power to cleanse and enrich our own character."

Posted by David Angsten at 4:37 PM No comments: 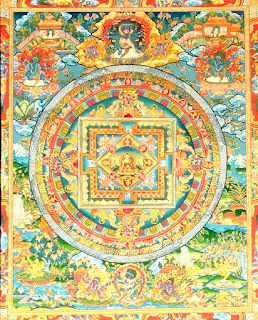 "In the strict use of the mandala, there is a central point or focus within the symbol from which radiates a symmetrical design. This suggests there is a center within each one of us to which everything is related, by which everything is ordered, and which is itself a source of energy and power. Virtually every spiritual and religious system known to man asserts the reality of such an inner center. The Romans worshiped it as the genius within. The Greeks called it the inner daemon. Christian religions speak about the soul and the Christ within. In psychology we speak of the Higher Self." ~MIchael H. Brown (michaelbrown.org)

Posted by David Angsten at 3:43 PM No comments: 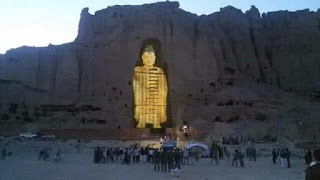 It seems the national motto of India applies to the famous Buddha statues of Bamiyan:

"The Taliban thought it had destroyed one of the world's wonders, the monumental Buddha statues of the Bamiyan Valley. But the Buddhas shine again in the towering cutouts in the mountainside where they stood for centuries. They are back, thanks to 3-D light projection. And they look great." 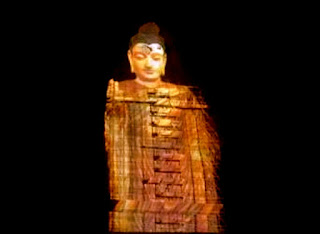 Read the whole story HERE.
Posted by David Angsten at 2:11 PM No comments:

The Best and the Worst in Us 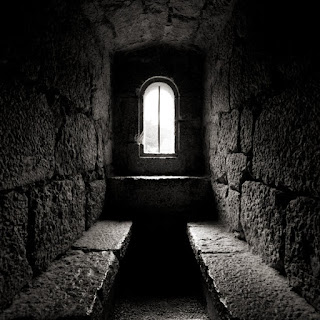 In his book, The Spiritual Doorway in the Brain, neurologist Kevin Nelson, M.D. describes the dual nature of the spiritual experience:


"It is sometimes impossible to tell where the healthy spirituality of the sage ends and spiritual psychosis begins. [...] We are all too aware today of the power of spiritual experience to do harm, as we watch people blow themselves--and others--up in the name of God. [...] The spiritual can be urgent and propulsive--spiritual truth has often come to be a matter of life and death. When we feel we connect with something larger than ourselves, we are willing to sacrifice our small selves to that something that we feel, that we know, is greater. This impulse can drive us to reach out to our fellow man in ways that are noble, inspiring, and even heroic. But it can also lead to intolerance and folly. In short, spiritual experiences bring out the best and worst in us."

Posted by David Angsten at 12:45 PM No comments: