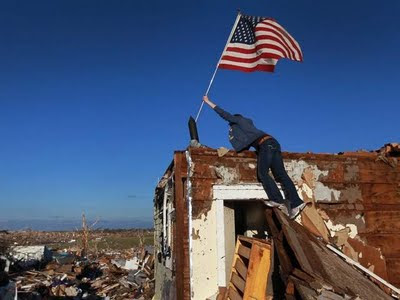 JOPLIN, MO: Crystal Kilpatrick plants an American flag on the house of a family friend after the home was destroyed when a massive tornado passed through the town killing at least 132 people.

Posted by David Angsten at 9:45 AM No comments:

Lunch with a couple Thrillers 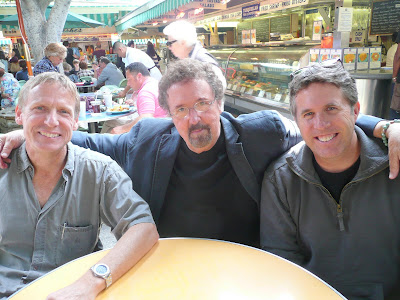 Had lunch at Farmer's Market yesterday with fellow LA writers Tim Hallinan and Brett Battles. Brett is a scarily prolific author with three (!) novels written in the last twelve months. I just finished his breathtakingly paced THE SILENCED, the 4th book in his Jonathan Quinn series. Quinn is a professional "cleaner" whose job is to dispose of bodies and clean up loose ends after a hit. He's usually hired by the good guys (CIA, MI6) but then, of course, you're never really sure who the good guys are...

Tim Hallinan spends half his time in LA and half in Bangkok, where his acclaimed Poke Rafferty series is set. Tim's latest novel, The Queen of Patpong, was nominated for an Edgar as best novel of 2010 by Mystery Writers of America.

Tim is currently working on a novel about the God's Army guerrilla group in Burma, led by the legendary 12-year-old twins, Johnny and Luther Htoo. I can't wait to read the book--just look at this amazing photo of the twins: 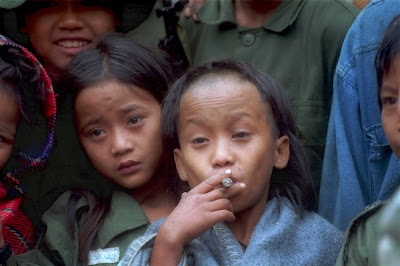 Posted by David Angsten at 11:33 AM No comments: 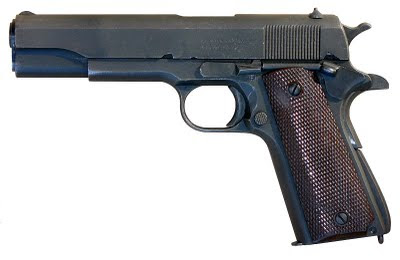 M1911 A-1 semi-automatic pistol
Jack Duran, the reluctant hero of my mythic thriller series, is currently in the Karakum Desert of Turkmenistan about to engage in a gunfight for the first time in his life. To research the scene, I asked my attorney pal Norman Boxley--a former Infantry Commander in Vietnam--to give me a lesson in firearms and shooting. Together with his son Will and Will's Vegas buddy Rob, Norm drove us up to the Angeles Shooting Range in Tujunga Canyon just north of LA. 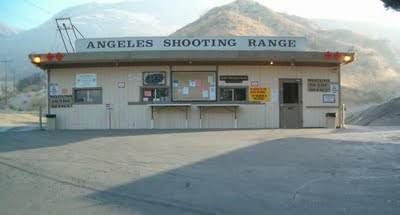 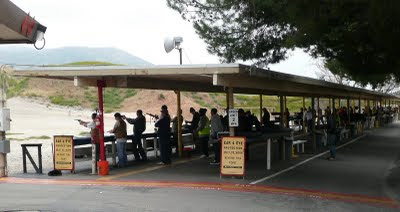 I'd never been to a shooting range before. Guess what? It's loud! You're required to wear ear plugs and eye protection, and even though the shooters are all aiming toward the hills, the random, incessant BLASTS of the guns made the whole canyon feel like a war zone. I kept thinking how in a real firefight, with the barrels pointed at you, the noise would be a major fear factor. 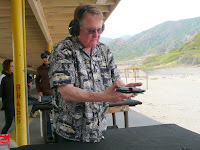 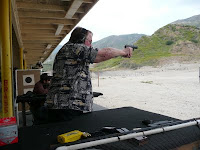 In the last shot you can really see the recoil; also note the shell ejected as the bullet is fired. [Click to enlarge] 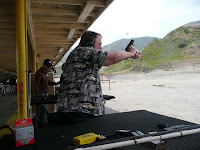 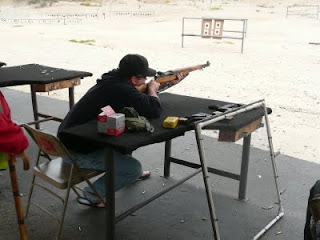 Here the expert Will takes aim with his father's M-1 rifle. The lightweight M-1 was a standard weapon in the U.S. Military from WWII through Korea and Vietnam. It's very user-friendly. I hit a dish-size target at 100 meters on my very first shot, which made me understand how easily a soldier could come to love his rifle. 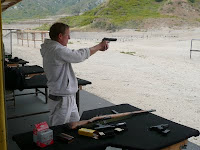 I liked Norm's 1911A-1. It takes a .45 caliber bullet; a single shot in the right place could easily kill a man. I was finding it hard to hold it steady. 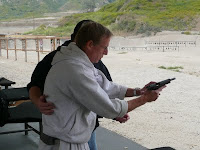 Will says I'm leaning back too much and helps adjust my stance. You need to put your left foot out front, he says, face the target more, and form a kind of triangle with your body and your arms, leaning into the shot to balance against the recoil. 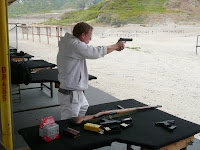 It's a very aggressive stance.

Will shows how it's done. 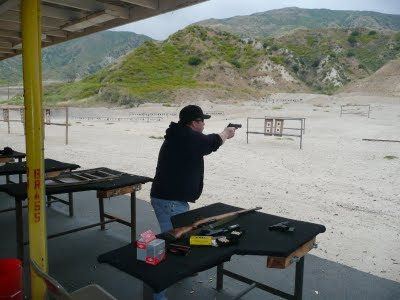 Posted by David Angsten at 3:42 PM No comments: 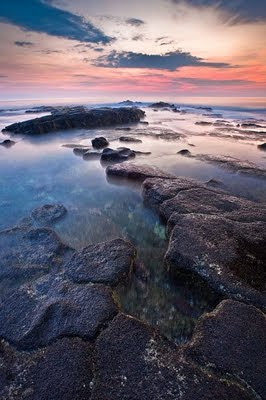 Check out the marvelous photo gallery of reader Shaun Mazurek. His long-exposure landscapes exude a kind of timeless quality that borders on the Transcendent.
Posted by David Angsten at 1:23 PM No comments:

Fight of the Century: Keynes vs Hayek, Round Two -- a brilliant cinematic hip-hop dramatization by John Papola and Russ Roberts.

Posted by David Angsten at 2:10 PM No comments: 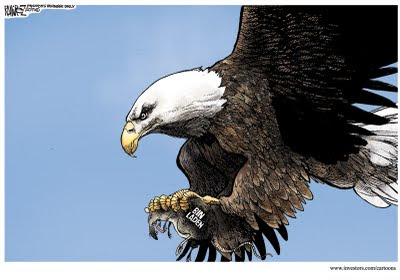 Michael Ramirez (click to enlarge)
Posted by David Angsten at 9:08 PM No comments: