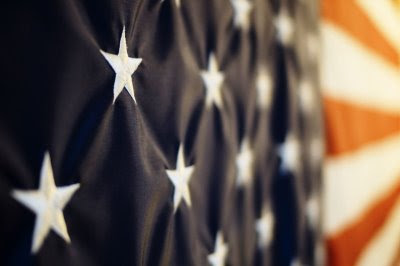 Just in time for the Memorial Day weekend, I received a copy of my Uncle Bob Angsten's account of his experiences in WWII. Bob was assigned to the 1252nd Engineer Combat Battalion, a part of General Patton's Third Army. After nearly getting killed during the Battle of the Bulge, 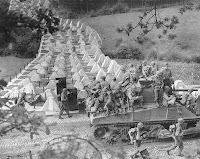 he rode with a fleet of tanks across the Siegfried Line, 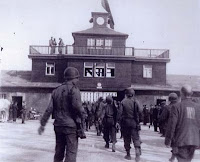 passed through the Buchenwald Concentration Camp,

dropped in for a visit to Hitler's Eagle's Nest, 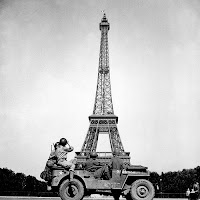 and celebrated his survival with a two-week "Rest & Rehab" gig in Paris.

Time to head home, right?
Not yet.

"In July, '45, we were sent to Marseilles, France to be completely re-outfitted with new vehicles, arms, clothing, for our intended re-assignment to the CBI (China, Burma, India theater of operations) to help end the war with Japan. Everyone knew that, since the 1252nd single-handedly ended the European war, we would be needed to do the same thing to Japan. On August 23, 1945, we left Marseilles heading for the Panama Canal. Three days later, "the bombs" were dropped on Japan and our troopship abruptly changed course for Camp Miles Standish, Massachusetts. In the Boston harbor, by this freakish and undeserved turn of events, we happened to be among the first, if not the, first troopship to return to the States. In the craziness and jubilation of the moment we were escorted into the harbor by anything and everything that would float, including several fire-boats shooting water over our bow. No other experience on earth could match the emotional intensity of that moment when 2,500 grown men aboard were bawling like babies!"

Uncle Bob went on to serve in the Illinois National Guard before embarking on a career in the auto industry, marrying, and eventually raising six children. He ends his humble tale with this: 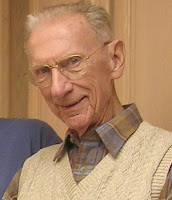 "All of my still-surviving buddies of the 1252nd agree on one thing: we would never want to go through anything like WWII again, yet we wouldn't have missed the experience for all the world! Note that not wanting to go through it again is a lot different than refusing to go. Living in freedom is well worth the price."

Posted by David Angsten at 4:21 PM